Another wonderful thing about the Lucky 7 is our awesome birthday celebrations. ( I am next up in the birthday timeline, I am so pumped!)

Niall, Darcy's husband, turned 31 this past Friday. In order to celebrate we played laser tag! That's right....laser tag. Due to Niall's schedule we had to go on the Monday before his birthday, and it was so much fun! We went to Frankie's Fun House and to put it into perspective on how awesome this laser tag was, please read the description that is on their website about it:

Lasers make everything cooler. Seriously, take anything and put lasers on it and watch it's cool factor jump through the roof. Trained attack ninjas, or trained attack ninjas with lasers? Unicorns dancing on rainbows, or unicorns dancing on rainbows with lasers? Homeless puppy shivering in a rainstorm, or homeless puppy shivering in a rainstorm with lasers? See? We know the puppy will be okay, why? Because the puppy has lasers. It's not sad, it's cool. Somehow we don't think you've quite grasped the concept. Dude. It's tag. With friggin' LASERS!


John, Kim, Cassie and I were on the red team, while Darcy, Niall, Stephen, Rachel and Niall's friend who I cannot remember the name of (sorry) were on the blue team. The red team, is not a very competitive bunch, expect apparently when it comes to laser tag because we ended up winning! John guarded the base and Cassie and I hid on the bottom floor performing sneak attacks. We had a blast, if it had been cheaper, we would have gone for another round. 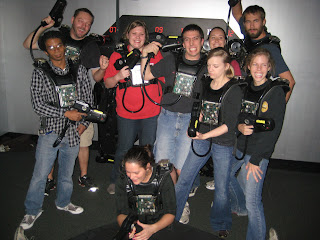 After the laser tag fun, we headed back to the Berry's apartment to have some cake, beer, and singing for Niall's birthday. Niall was able to open some presents, which he was very excited about: 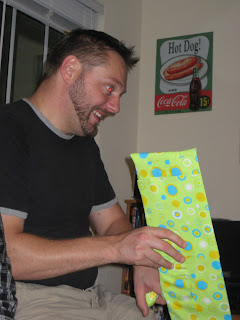 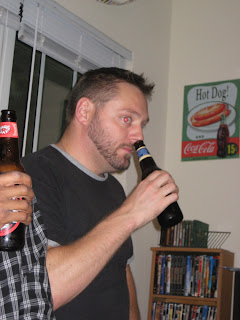 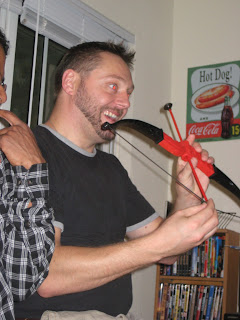 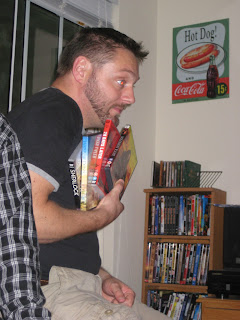 The best present in my opinion was the sign that Kim made for Niall:

Overall, it was a great night with great friends, celebrating the day that the world went from being without Niall to being with Niall :)

Why am I being mocked on my birthday?
Posted by Ginger at 8:08 PM